Status? Daily goal of 2000 words met. Over 10,000 words total. Preface+3 Chapter are COMPLETE! (If you want this sort of update as it happens, you can follow me on Twitter. Or you can just check out the sidebar ---> over there. I actually just got the account so I could have the sidebar, not the other way round; I've found brief sentences are really therapeutic when I'm writing. I can blurt out thoughts - that no one hears, but hey! who's counting - and momentarily relax my head from plots and grammar. It's very nice. And I thought the thoughts would be a nice addendum to the blog. Hence the sidebar.) 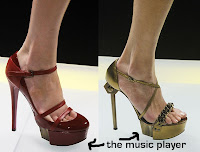 Speaking of blog widgets, we are living the high life and have a music playlist now. Movie soundtracks, of course. I'm still not sure what I think of it; I like the coolness factor, but I think it may be a little much. Since I constantly have music running through my iTunes (as I type, Jesus Culture's "Fire Fall Down" is playing), I've actually found them a little annoying on other blogs. But it was just too...cool...not to pass up. What do you think? Too much? Is the immediate start annoying? Or do you just RSS Feed everything like I do and didn't even know that I had a music player. (I'm beginning to have a feeling that I've subscribed to a fad like over-sized sunglasses or the really weird clog-sole shoes that we all know are going to be gone in less than a year.)

Wait. This blog is all about writing, not blogging. What's up in the write-o-sphere besides being up to 10,000 words?

Well, I straightened out a kink in the plot. *silence* Okay, this is major cause for celebration, people! :) Every time I can make the plot smoother and more understandable, I rejoice.

At the beginning of the third draft, I introduced (bad idea, btw. don't introduce stuff in the third draft.) a...what's-it-called...a prop, I guess. But it's not a prop. It's something that gives Ivolet a headache for ostensibly unknown reasons whenever she sees it. And I wondered why I was introducing it.

I figured it out this morning. It's the plot jerk that will pull the narrative thread tight. I've been in a bit of turmoil because the first third of the book has one conflict, the second third has a different conflict, and the third returns to the first conflict. It was confusing, and it made the middle feel like the odd man out. (Poor middle.) The obsidian stone that I have introduced not only furthers the plot thread of Ivolet's amnesia, it also is significant of betrayal and is beginning to mark characters as good or bad or clueless. And it's going to last until the climax.

I'm very happy right now. I love the visual of pulling the narrative thread tight, and I think this is going to be what does it. It's binding everything together, creating a common theme for every chapter to hark back on.

Who would have thought that giving someone a ring of obsidian would make my writing life so good? This is probably the only time that introducing anything in the third draft is a good idea. I don't recommend it, because it usually ends up confusing. But today, it was good. I'm not introducing any new plots, only making everything so much clearer.

Hmmm, maybe I've found a semblance of a title? Something to do with obsidian. Isn't that a pretty word, obsidian?

Does anyone get the (hopefully) witty post title? Imho...I'm a bit proud of it. Small pleasures.
Posted by Melody at 12:26 PM

yay for success and progress! loving your blog -- the layout is fab!

Awww, thank you Tahereh! :D Glad you like it, and glad you're here!

Well, working out plot kinks and writing thousands of words? You are made of win.