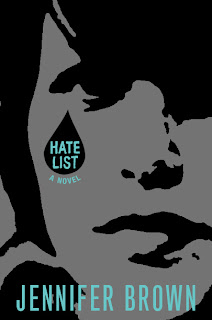 For various reasons, I don't do reviews of every book I read. Sometimes I think they've gotten enough positive publicity already, or they're not that good, or I they weren't good enough to gush about. (I like gushing about books.) Plus, this isn't really a book review blog.

But, hey, rules were made to be broken. The following book hasn't gotten enough publicity, was really good, and worth gushing about. :)

I just finished Jennifer Brown's Hate List. If you like YA novels with a good voice, well-told story, and real-life problems, you need to read Hate List.

SUMMARY (by moi): Valerie never dreamed that the hate list she created with her boyfriend would dictate who he shot the day he brought a gun to school. A summer after the day when he killed students and faculty, shot her, and killed himself, she is braving the halls of Garvin High once again. It's a rough ride as old friends shun her, old enemies take her side, and the favor of family is lost. The story is told from Valerie's point of view and takes place during that fall and spring semester of her senior year, yet there are many flashbacks to before and after the shooting that are fluidly interwoven through the story.

I'm not contemporary YA's biggest fan, usually because I can't get through the first chapter before people are sleeping around and flippantly using the F-word. That's why I wasn't expecting to make it very far in Hate List (although it's worth noting that there was nothing flippant in this book). It slowly but surely drew me in.

At first I was horrified by Valerie's lingering attachment to Nick, school shooter, even as she tried to pick up the pieces. Yet as the story progressed, I understood her. I sympathized with her. I loved her, and I wanted her to be happy. I was crying out to all the other characters - and there are no one-dimensional characters in this book - to accept her, to love her, to forgive her.

My favorite part of the book was the reality of the story and its characters. Nobody's stereotypical here. I appreciated little brother Frankie and the fact that he wasn't really a little terror like most YA borthers; because, really, not all little brothers are. I went from hating to understanding mean-girl Jessica. I was glad that the psychologist/counselor that Valerie regularly visited was a nice guy who really wanted to help her. He wasn't some freaky, disturbing person to make fun of. And while I first thought Ginny insensitive, I eventually realized she was just as traumatized as Valerie had been. My heart even began to bleed for Nick.

(I have some other comments I want to make regarding certain themes in the book, but I think they'll get so long I'll have to save them for another day.)

And let me know what you think. :)


EDIT: I wrote an email to Jennifer Brown letting her know how much I enjoyed Hate List. Here's what I wrote:


Hi Jennifer,
I just finished reading Hate List and loved it! It drew me in, and I couldn't pull myself away from it for any extended length of time over the weekend. I was even hearing Val's voice in my head. Such an intriguing story, and very easy to relate to for those of us who have grown up with school shootings happening all around. I really appreciated how real the characters were. They weren't perfect, because people aren't perfect, but they had realistic changes of heart and actions. I even began to relate to Jessica and understood why she had changed and why she wanted to be friends with Val. All in all, it was a breath of fresh air to get away from stereotypical mean girls, younger brothers (they really aren't all bad!), and psychologists, too. I really liked this book (and will be favorably reviewing it on my blog!). Thanks for writing it!
melody

I was honored that she wrote me back this morning! SCORE ONE MORE for authors that write you back. :)
Posted by Melody at 6:00 AM