What brought me to this conclusion? Will {Heath Ledger} from A Knight's Tale. He has no flaws. He's very interesting. But not invincible. 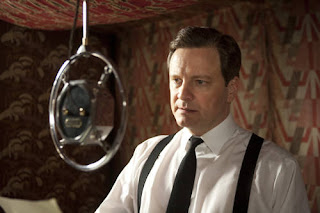 Am I going to write a post stating that characters must be invincible and that flaws are optional? No. I think I've dug myself a deep enough hole.

Have I found another interesting character example? Yes. King George VI from The King's Speech. {Have I mentioned that this is one of my favorite movies of all time? It is.} Flawed? Yes. Insecurity. Heroic and honorable? Yes.
Posted by Melody at 10:05 AM

Yes, absolutely--every hero/heroine has to be vulnerable in some way. Otherwise there's no tension at all. And a good story would focus on how the protagonist overcomes obstacles despite that vulnerability. Very interesting posts!

True if they're invincible, it's not reality.