Choose An Otter For Swimming

Cabin fever. Got it bad. Badly. Whatever.
You would think that a winter storm would be great for a writer - and it is, since the pipes to the washing machine are frozen and I'm free! - except for one thing...I own the only laptop in the house. And the wireless router is out, so you have to go directly in to a computer. A mobile computer. My computer. Four people are now using half as many computers as we were used to. Exit any thought of good writing time.
On the plus side, I'm so close to being done that I may be finished tomorrow, despite the constant laptop tug-of-war. If the pipes don't unthaw and give me loads of laundry to wash. And a shower to take. (Oh! Shower, how I miss thee!)
Which brings me to... 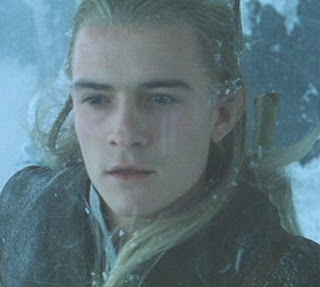 "Legolas watched them for a while with a smile upon his lips, and then he turned to the others. 'The strongest must seek a way, say you? But I say: let a ploughman plough, but choose an otter for swimming, and for running light over grass and leaf, or over snow -- and Elf.'
"With that he sprang forth nimbly, and then Frodo noticed as if for the first time, though he had long known it, that the Elf had no boots, but wore only light shoes, as he always did, and his feet made little imprint in the snow.
"'Farewell!' he said to Gandalf. 'I go to find the Sun!' Then swift as a runner over firm sand he shot away, and quickly overtaking the toiling men, with a wave of his hand he passed them, and sped into the distance, and vanished round the rocky turn." - The Fellowship of the Ring, by J. R. R. Tolkein

Please, Legolas! Find the sun and bring it back to me!
Posted by Melody at 5:00 AM

Haha. Don't tell my hubs I said that!