This has nothing to do with books. Or maybe it does. Because this is the first book-to-screen adaption I've been excited about since...I don't know. Not since The Lion, the Witch, and the Wardrobe, probably. {No, i was not this stoked about Prince Caspian or The Voyage of the Dawn Treader, but that's another blog post I will probably never write.} 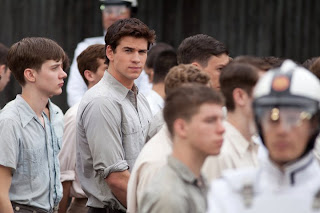 It's all because of these pictures and this picture that I'm all squee-excited!!! See that awesomeness over there? That's Gale. Gale!

{For the record, I am not the biggest Liam Hemsworth fan. Got nothing against him, he's just not Orlando Bloom.}

{Also for the record, I still think he looks way too old. And just to prove that I'm a fair person, I'll add that Orlando is also too old. Alas.}

BUT THIS PICTURE MAKES UP FOR ALL THE THINGS I STATE 'FOR THE RECORD.' Something about the costumes, and the coloring, and the police in the foreground. Omgosh. {Granted, he looks exceptionally pretty in a starving, impoverished society.} It's just so real, so vivid. The look of it is just how I imagined. Though I didn't imagine it with Liam. Whatever. You can't have everything.

Anyway, I'm just really happy right now, and I thought I'd share that. Go to the link for four other epically awesome pictures from The Hunger Games. Aaaaah, I don't think I was kidding when I said I've been this excited for a movie since the first Narnia film!!!!!!!! :D

What about you? Hunger Games fan? Looking forward to the movie, or not? Thoughts on Liam...

Haven't read the Hunger Games yet, but I'll make sure I do before I go see the film.