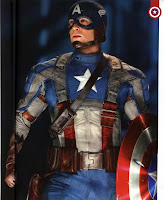 There was so much to like about this movie! The fact that it was set in World War II made it incredibly unique. {Actually, all the Marvel movies/heroes have been unique in their own way. Thor was made interesting by the fact that its climactic scene took place in a little town in the middle of nowhere and not in New York City.} The forties had the coolest clothes, not going to lie. And Tony Stark's dad was there! I was so freaking out about that!!!! And Steve Rogers/Captain America is just so, swoon, heroic. He's just...everything you want in a guy.

Flawless. That seems like a good thing, right? The perfect hero. I mean, if you were in a bind, you'd much rather have Captain America coming to your aid than the arrogant Iron Man. Or even aloof Thor.

The first act was the most interesting. Here's a shrimpy asthmatic with the guts and honor of a warrior. But then his body matches his heart, and, suddenly...he's absolutely boring. Flawless, and boring.

I found myself comparing him to Iron Man, then wondering why. Iron Man has serious issues. He's a player, he's arrogant, maybe occasionally dishonest, and very, very selfish. He's flawed. And while his two movies definitely have external conflict--what's a superhero movie without that?--there is loads of internal conflict. He's a jerk trying to figure out what it means to be hero. He's a selfish guy trying to nurture a selfless heart. He can charm every woman in the country...except for one. {His character arc hasn't quite landed yet, I don't think. He's still struggling. But I believe he's the highlight of The Avengers, so maybe this most interesting superhero will grow even further. And don't forget Iron Man 3.}

Thor is the same way. He starts out his movie arrogant, disobedient, disrespectful, impetuous, and annoying, convinced that everyone else was put on earth for his benefit alone. He ends the movie...a self-sacrificing hero.

A flawless character is boring.
And as awesome as Captain America is, he needs at least one internal problem to overcome.

{I have been told that Captain America has more issues to deal with in The Avengers. I hope it's true, because I really liked him. I just didn't relate...and I wanted to.}
Posted by Melody at 6:47 AM

I guess to some, flawlessness is what superheros are made for. Like superman - all nobility in and out. I didn't see Captain America. The hubs said it was alright. I'm excited to see the Avengers, though!

I agree, but I'm a sucker for an honorable good guy who is breathtakingly dangerous (like Four in Divergent). Bad boys--Tony Stark among them--are indeed flawed, but I get so tired of all the alpha male arrogance. I'm not disagreeing about Captain America, I'm just stating the obvious, I guess--there are other ways to give a character flaws than to make him an a-hole ;)

Haven't watched this movie yet, plan to though. You're right, we need to give our heroes, flaws.