I think I'm answering this on the wrong day. I think I was supposed to answer it on Tuesday, because that's what Katie did. But, you know, whatever. 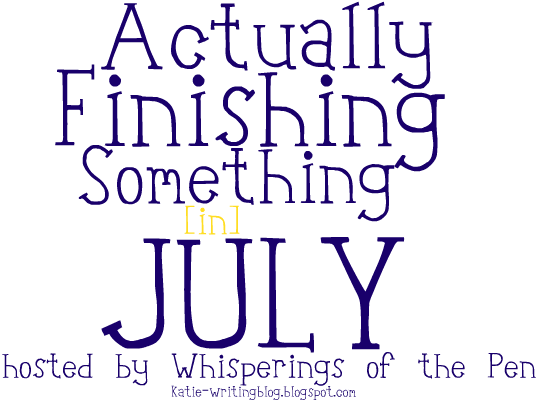 Were you able to meet (or exceed!) your goal this week?
Almost--I have one day left and need to grab one more hour. And it's going to happen.

Where did you get the bulk of your writing accomplished? In the quiet of your room, outside on the patio, on the bus?
The quiet of my room. Occasionally on the porch, but the less distractions the better.

Share a couple of your favorite snippets!
This is surprisingly hard! I've gone over this story so much that it's all become my favorite, in one way or another. But if we're focusing on things that have popped up this July, I'll pick one of the darker additions:


“I was waiting for her to say how badly she wanted to see me in the electric chair.” My voice cracks. The other side of the police station is boring. I look at my black jeans.
It takes Clayton a long time to come up with a response. The sparks are gone from his words when he speaks. “Did she?”
“No. The interviewers always tried to to bait her, but she just sat there and said...” What she said is that hate was for the weak, forgiveness for the strong. She thought I should get a second chance. And a hug. She liked hugs. “I don't remember what she said. She quoted the Lord's Prayer a lot.”
A choked laugh stumbles through his lips. “Forgive us our trespasses.”
“As we forgive those who trespass against us.” I let the words whisper through my mouth. Hold them there, savor them like the sweet outer coating of a Cosmian pill.
Clayton stares at me, his eyes burning. “You know it?”
“I went to Sunday School, Clayton Ford. I know it.” Swallow down the words as they melt to bitter chalk. “Don't worry. I don't agree. I think trespassers should be shot.”


Have you introduced a new character into your story? Tell us about his/her personality.
I hope not! This is a final, final, final draft that I'm finishing up. But I have given a certain character more "screen time". His name is Dmitri. He's a Russian assassin with red hair, and he's a very calculating individual who never smiles. He's very calm and never, ever loses his temper.

List the favorite foods of your main characters.
Well, Jenn is addicted to black coffee, and she'd argue that it is a food even if it isn't. Clayton likes cinnamon flavored gum. He also likes Texas barbecue, but that doesn't come into this story.

Introduce us to the antagonist in your story. Does he/she prefer crunchy or creamy peanut butter? 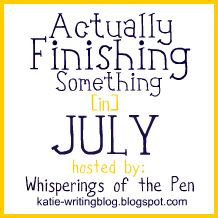 Colette Cobb is somewhere between twenty and forty years old {you have to be ageless if you switch identities as often as she does} and is a rising thief/assassin in the great world of thieves and assassins. She has a short fuse and is easily annoyed. Dmitri was her teacher, and it gets on her nerves when he tries to make sure she's learning the lesson at hand...even though she's long graduated. As for peanut butter, because she likes it the way she likes her makeup...smooth and creamy and flawless.