Me: I made a breakthrough on my story today.
Mom: Oh, the ice skating one?
Me: No, the princess one. The one I'm supposedly writing the third draft of. [sic]

Problem is, I don't want to write the third draft until I have it outlined and plotted out so nothing jumps out and surprises me again (necklaces that show up once, get lost, and never get searched for or found; treachery that I never intended; odd appearances of peaches - yes, peaches! - that make me wonder what I was thinking). And I don't want to outline it until I know exactly what I want, exactly what I want to keep from the former drafts, and what I have got to get rid of.

There are two colorfully typed pieces of paper on my floor right now, surrounded by my plethora of colored highlighters (thanks, Mom!) and colored pens (thanks, JW!) that list every single scene in both drafts. It feels like I spread my story out on my floor (if my floor could be covered by 194 8.5"x11" pages) and suddenly gained a superpower to defy gravity. This way, I can float above and point out the scenes I love and those that, well, I didn't (and thus know which ones to keep).

That's why I say I'm only supposedly writing it. I've been "working on" the third draft for several weeks now, but I haven't gotten past the first page of any actual prose, especially any prose that I liked. I've been messing around with the beginning, having recently realized that a slow beginning that builds to action is never going to hook an agent. (And, upon further inspection, not even a reader, which is ten times as important. I wouldn't even read past the first few pages.) My beginning is doubly tricky, too, because it has to inform the reader of several facts before Ivolet, the protagonist, loses her memory and gains a new name.

The result? A first-person present-tense jump straight into the action. I totally scratched two scenes at the beginning that introduced characters (that promptly died, or lost their memory, or weren't revisited for chapters) and just went straight to the blood and gore of assassination. It was lovely. :) And I think it will merge well with the story, because it can kind of be a...what's it called...a presentiment of the nightmares she'll allude to later in the book.

Somehow, that isn't as comforting as it should be. Yay, the first of what the second draft clocked at seventy-freakin'-one scenes. (That was sarcasm.) This book is not an epic, was never intended to be an epic, and it really needs to shrink just a tad.

But, the outline is progressing, and I'm glad I have a beginning that I (finally!) like and love and that hooks me into reading. It's a start.

In other news, guess what book came in for me at the local library?!?!!? (Need a Hint?) 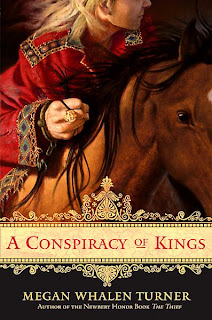 There are few things in life that the newest book from [insert favorite author here] can't solve. Life is stressful, but Megan Whalen Turner always delivers. I can't wait to be surprised by the twist that I'll never see coming, and I can't wait to see Eugenides again. I CAN'T WAIT!!! It's sitting on my desk beside me as I type, it's beautiful, majestic cover of someone (Sophos? Eugenides? Someone New?) riding a horse. Riding a horse, urgently, looking behind him as if pursued. Is he fleeing? Bringing news? Who is he? Definitely noble, by his attire and his bold ring. (For the record, I want Megan Whalen Turner's cover designer to design my covers, too. Pretty please! Best covers ever.)

There's an almost empty glass of ice-cold lemonade on my desk, too. I had intended to drink it while I started A Conspiracy of Kings, but I had to blog about getting ready to read it first (of course!) and thus my lemonade is almost gone. Texas is hot. Anyway, I told Mom that I wondered how long it would take me before I read it. "Because," I said, "I love to know that I still haven't read it yet and that it's still waiting for me to read." She understood.

But it's tempting me, calling me, like a lover, like an escape, like a fantasy world. I'm going to read it twice, I've already decided. If there aren't any blogs for a while, it's because I got one of my many wishes and somehow woke up in Attolia.


iTunes DJ
"Letting Go," by Matt Moore
"Rsl 1984," by Newsboys
"Michelangelo," by Satellite Soul
"God and His Impostors," by The Silent
"No Fear," from The Swan Princess
"Evenstar," from The Lord of the Rings: The Two Towers
"Light Up the World," by Desperation Band
"Rock of Ages," by David Crowder
"All I Do Is Think of You"
Posted by Melody at 5:57 PM

Turner is very popular on Narniaweb, isn't it? And considering how often people there talk about those books and the fact that I never let spoiler boxes stop me from reading anything, it is amazing that I still have no idea what they're about--just that they're incredibly good and have brilliant plot twists. Hm, maybe I'll have time to read them when I'm eighty.

I believe she is. :) (I was a frequent NarniaWeb uses "theprincessspy" and then I drifted off...) Brilliant plot twists - yes. Haha, when you're eighty. They are so well-written, each book amazes me. I sit there and wish I could write like she does.

Yes, I found your blog through Narniaweb (the comments on one of the news stories). I had noticed you weren't around the forum anymore. :)