Savvy: a Review (or: MG REPRESENT!)

It was all the cover art's fault, really. That, and the title. I never meant to pick up Savvy. I was killing some time in small-town library, reminiscing over times past in the children's room, and stumbled on this beautiful piece of literature: 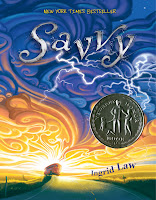 I skimmed the "inside-front-cover-flap" and thought, "Hey, this could be good." Encouraged by the "New York Times Bestseller" and "Newberry Honor Book" on the front, I put it in my stack.

When I began reading the next day, I intended to make it one of those books that lasts me several days. You know, just reading here and there.

Ha! Was I in for a big surprise! Narrator Mibs welcomed me with this piece of whimsy, and I was captivated:


"When my brother Fish turned thirteen, we moved to the deepest part of inland because of the hurricane and, of course, the fact that he caused it. I had liked living down south on the edge of land, next to the pushing-pulling waves. I had liked it with a mighty kind of liking, so moving had been hard---hard like the pavement the first time I fell off my pink two-wheeler and my palms burned like fire from all of the hurt just under the skin."

Actually, all the sub-characters were so fleshed out. They were real. The drunk she met in the alley was as real - had as much personality - as Mibs did, as did her brothers, her sisters, her parents, her new (and old) friends. Dude, Ingrid Law knows her characters inside and out and lets you know, too, with the perfect blends of show and tell.

And the voice! If you aren't wondering what sort of person Mibs is by that paragraph up there, why she talks the way she does, why she says pushing-pulling instead of...well, something else. Pushing-pulling actually describes her voice well; she speaks with a cadence that both belies and reveals her age.

Last but not least, Savvy is brilliant. All I could think of was a constant wish that I'd had this idea. How Ingrid Law combined coming-of-age, familial relationships, the power of words and thoughts, and a brand-new, never-before-thought-of storyline (in the magical realism genre) is beyond me. But she did it, and did it well. Whoa! Wow! *Applause*

Shannon Whitney Messenger's been feeling a bit sorry for the lack of Middle Grade publicity in the blogosphere and highlighted a few good ones yesterday. I'm here to spread the MG love. Read Savvy, all you YA authors/readers! You won't be disappointed.

Also here to report that Newberry Honor author (Princess Academy), Shannon Hale, has delivered two beautiful twin girls! And Lisa Roecker, of the Lisa-and-Laura writing duo, has brought forth a baby boy into the world! Congratulations to all!!
Posted by Melody at 1:32 PM